America reaches milestone with COVID-19 vaccine widely available to those who want it, but hesitancy still casts a shadow

USA TODAY's panel of experts celebrate the success of the U.S. COVID-19 vaccine program but worry that although most Americans can get a shot, too many won't.

s of Monday, COVID-19 vaccines are available to every American over 16 who wants a shot, but a panel of experts convened by USA TODAY remains deeply concerned about the people who say vaccines aren't needed.

Anxiety about getting a shot is normal, expected and can be resolved with education and role models, several panelists said.

"People who have questions deserve to have those questions answered. That’s fair and that’s on us," said Dr. Gregory Poland, director of the Mayo Clinic's Vaccine Research Group.

What he and others worry about are those who deny the importance of vaccination and try to convince others to forgo it.

Vaccines from Pfizer-BioNTech and Moderna have been shown to be effective – preventing upward of 90% of infections, both in clinical trials and real-world studies. And they've been shown to be safe, delivered to more than 125 million Americans.

"You would have trouble finding a better vaccine," said Dr. Paul Offit, director of the Vaccine Education Center at Children's Hospital of Philadelphia.

Once a month for nearly a year, USA TODAY has examined the development and rollout of COVID-19 vaccines with an expert panel whose specialties range from virology to logistics.

We asked members to create an imaginary clock, starting at midnight, when the virus first came to public attention and ending at noon when anyone who wanted a shot could get one. 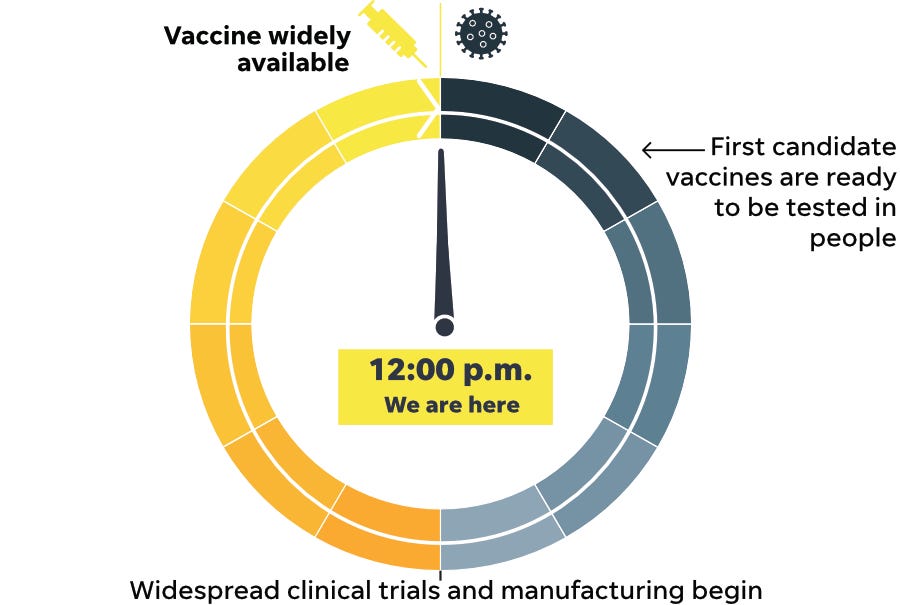 Last June, the first month of our coverage, panelists put the time at 4 a.m., and estimates advanced by a full hour most months.

Although it's still a challenge to work the computerized registration system in many states, theoretically high noon has been reached, and vaccines are available to most  everyone.

We had expected to roll the clock back at least once, as vaccine development and rollout stumbled. Though it took 11 months to advance eight hours, we never went backward, a testament to the massive resources devoted to creating the vaccines in record time.

This month, the message from the 15 panelists was clear: Vaccines are safe, effective and a triumph of science – essential for ending the pandemic and restoring the U.S. economy. The big challenge is getting enough people to take them.

COVID-19 has claimed more than 567,000 lives in the USA and sickened millions more, yet fears remain among too many Americans about the tiny safety risk that comes with all vaccines.

"The threat is right in front of our noses, and we look past it to worry about an overblown and theoretical risk that hasn't been supported after tens of millions of vaccinations," said Dr. Otto Yang, an infectious disease specialist at the Geffen School of Medicine at the UCLA.

In 2018, vaccine hesitancy was listed as one of the Top 10 global health threats by the World Health Organization.

People still seem to think pathogens aren't a problem unless they're personally affected.

“I hear people say things like, ‘We didn’t take it seriously until my brother died of it, and after seeing what he went through, then we changed our mind,’” Poland said. “That means a whole lot of people have to die to convince people.”

Some panelists expressed optimism that most can be convinced to get vaccinated, to protect themselves and others.

"I am amazed by how effective these vaccines are in real-world studies," said Dr. Monica Gandhi, an infectious disease expert at the University of California, San Francisco, "and am over the moon that we are so lucky to have these vaccines."

Despite hitches, the vaccine development and rollout have been incredible accomplishments.

The first vaccines were developed and completed large clinical trials less than a year after the SARS-CoV-2 virus was identified. Massive amounts of federal funding under the Trump administration assured that large-scale manufacturing wouldn't lag too far.

Under the Biden administration, distribution of the vaccines stepped up substantially, along with production, and more than 3 million Americans – roughly 1% of the total population – get vaccinated every day.

The success increases the stakes for getting the majority of the population vaccinated, Moore said.

"If we fail at that, it’s a failure of will rather than a failure of science," she said. "And we will have no one to blame for but ourselves."