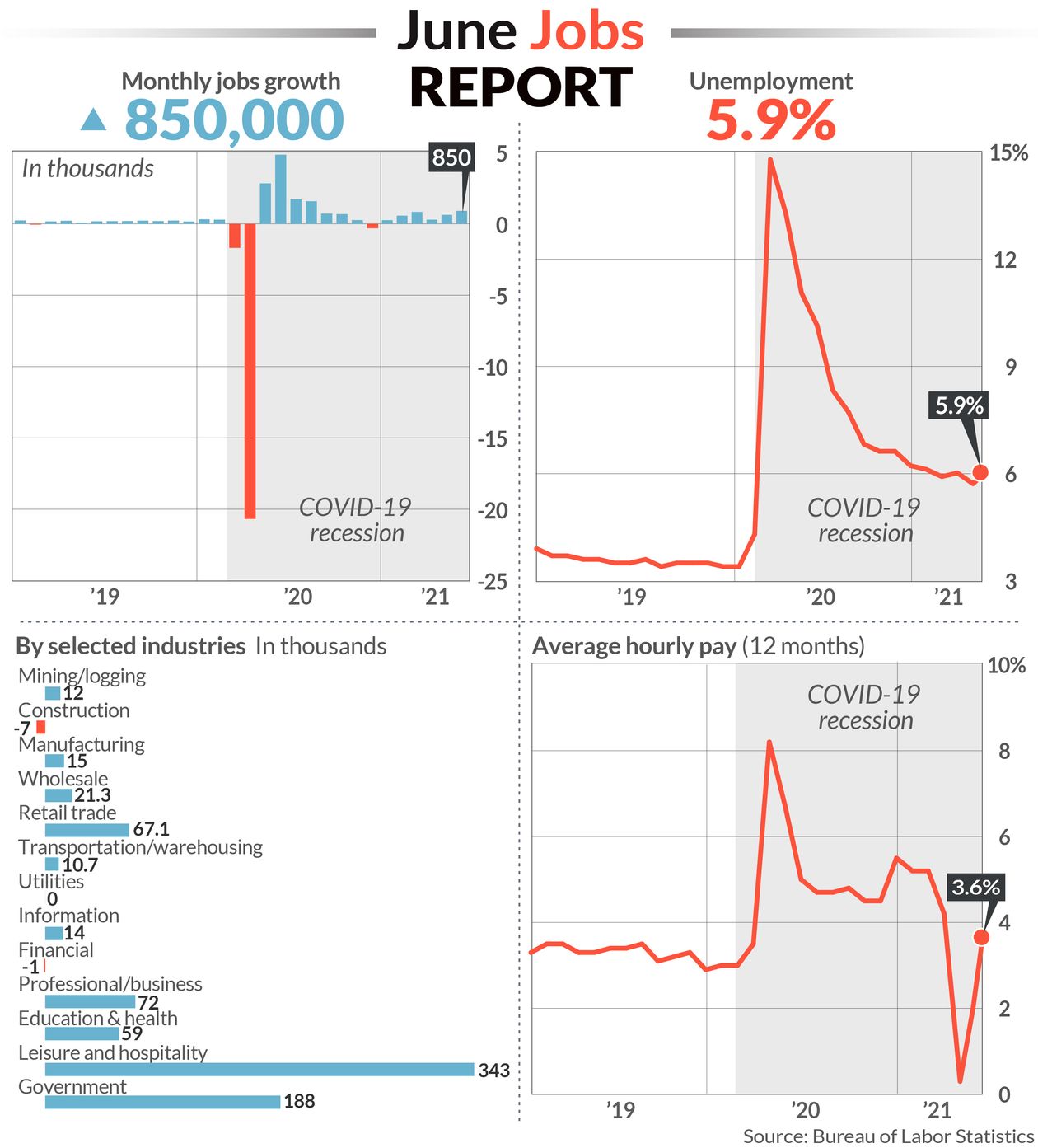 The numbers: The U.S. created a robust 850,000 new jobs in June as the economy perked up and companies rushed to add more workers, but at the current pace of hiring it’s likely to take more than a year before employment returns to pre-Covid levels.

Most of the new jobs were clustered in service-oriented positions at restaurants, hotels, retailers and the like.

Government payrolls also rose by 188,000, but that was largely the result of pandemic-related effects on education and should be discounted, economists say. If those jobs are set aside, the job gains in June were a bit less impressive.

The labor-force participation rate, reflecting the share of able-bodied people 16 or older who were in the labor force, stood at 61.6% in June —the same as it was last October. The paradox of what’s turned into a robust economic recovery is that unemployment is still quite high despite a record number of job openings.

Many Americans are reluctant to return to work. Some are still fearful of the virus. Others have to care for young or old family members. And generous unemployment benefits allow people to be more choosy about the jobs they take.

Some 26 states will stop giving out extra federal benefits of up to $300 a week by early July in an effort to nudge people to return to work. Businesses have complained that high jobless benefits are deterring people from accepting jobs.

People are also quitting at record levels, in most cases to take a better-paying job. That’s pitting companies against each other for labor. Almost 1 million people voluntarily left their jobs in June.

Still, the increase in private-sector hiring in June suggests companies are finding ways to attract or retain valued employees. Many have raised pay and benefits or offered other incentives such as bonuses.

The report is unlikely to sway the Federal Reserve one way or another. The central bank has kept interest rates extremely low to support the economy and it’s not expected to alter its easy-money policy anytime soon.

Big picture: The U.S. has plenty of job openings and plenty of unemployed people to fill them. Job openings recently hit a record 9.3 million and by some measures is roughly equal to the number of jobless Americans.

What’s partly holding back hiring, economists say, are several factors. The biggest are lingering problems from the pandemic.

By the fall most of these problem should fade away as schools, day-care centers and nursing homes fully open, economists say. That will make it easier for care-givers — women in particular — to go back to work.

Extra federal benefits will also end in all states in early September, potentially pushing more people back into the labor force.

As these issues clear up, the economy is expected to gain further strength and grow rapidly through the end of the year. Many companies are flush with record demand. They simply lack the manpower to provide all the services or make all the goods that they can sell.

Key details: Businesses in leisure and hospitality that suffered the worst in the early stages of the pandemic added the most new jobs last month. They hired 343,000 new workers in June, mostly at restaurants, hotels, theaters and entertainment venues.

Flush with stimulus money and buoyed by the rapid decline in the coronavirus, many Americans want to do all the things they avoided during the pandemic: Dine out, go to the theater, take a vacation or fly to visit family.

Government employment posted the next largest gain, but it was mostly a seasonal quirk tied to changes to education. Fewer layoffs occurred at the end of the year than usual because so many schools weren’t full reopen in the first place.

The only industries to shed jobs was construction. Employment fell by 7,000

Many companies say they are offering higher pay to attract workers, but the pandemic has skewed the government’s statistics and it’s still unclear how rapidly wages are going up.  Economists say it will be awhile until the wage numbers become reliable again and they can figure out what it really going on.

What they are saying? “Things are picking up. All that employer demand is turning into jobs and higher wages for many workers,” said Nick Bunker, economist research director at Indeed Hiring Lab.

“Although the labor market [is] on the mend, there are still millions of Americans who remain unemployed,” said Steve Rick, chief Economist at CUNA Mutual Group.

Market reaction: The Dow Jones Industrial Average DJIA,  and S&P 500 SPX,  increased slightly in Friday trades and were near or at record levels.

The yield on the 10-year Treasury note TMUBMUSD10Y,  was little changed.